5 reasons for scientists to use animated videos for their communication. 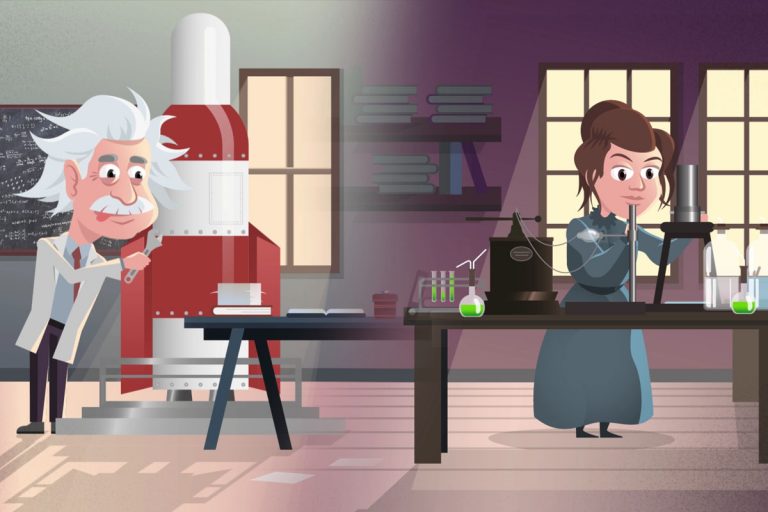 [This article has been auto-translated from our Dutch blog]

Most scientists don’t immediately think of an animated video if they want to make their project or study visible to the outside world. Nevertheless, an animated video can lend itself to effective science communication, especially if you want to explain a specialized scientific subject in an attractive and concise way. Five good reasons to use an ‘explanimation’.

Perhaps the most common communication challenge for scientists is to explain their research understandably to non-scientists. An even bigger challenge is to wrap the message in such a way that it attracts and retains attention and to ensure that the message is remembered. This is more likely to succeed by using a well-produced animation video.

The content marketing term ‘explanimation’ speaks for itself: animation videos are second to none when it comes to explaining. They are ideally suited to clarify an abstract idea, such as a specialist (scientific) idea or concept for the outside world.

One of the reasons for this suitability is that the format of an animated video forces the messenger to formulate briefly and forcefully. The rule of thumb is that an explanation animation should not be longer than 2.5 minutes, but shorter is often better, somewhere between 45 seconds and 2 minutes.

Formulating briefly and succinctly is a powerful communication weapon: a staggering amount of information is released to the media consumer and the information arc is therefore a few seconds shorter every year. Formulating short and concisely through an animation ensures that you can hold attention and transfer specialist subjects quickly and effectively.

Various studies on the use of online video show that videos are better able to hold attention than any other form of content. Moreover, messages via video are better remembered than messages through other means of communication.

People remember information that has come to them through (animation) videos, so it’s better than information they’ve received through other means. Why? Video content emphatically excites those parts of the brain where feelings are evoked and regulated. These ‘sensitive areas’ in the brain are given priority when storing information in memory.

So when the ’emotion center’ of the brain is addressed, it is more likely not only that the video will be viewed, but also that the message of the video will stick with the viewer. Even if the message arouses positive feelings. Video content is the backbone of many major marketing campaigns for a reason.

Animation videos have the added advantage (above live-action video) that can be played relatively easily in a creative, distinctive way with script, camera angles, image, color and sound. As a result, animations stimulate the senses extra well and have a great distinctive character. See below the creative Consortius animation video that can also be seen on our homepage.

4. Full control of the message

Another reason for the explanation qualities of the animation video is that it gives full control over the message. An animation is scripted from front to back and the possibilities are endless. The animator can determine together with the customer exactly what can be seen and heard in the video at what time. Such a deliberately timed interplay between moving images, colours, voice over and sound effects can be particularly effective.

Videos are at the top of the online content chain when it comes to sharing potential, appreciation and remembering the message. Scientists who want to reach a large and/or broad target group cannot ignore video as a means of communication. Of course, the kind of message has to lend itself to an animated video (or live-action video).

Videos are shared online more often than any other means of communication, and that’s no different for animated videos. This trend has been going on for years and is only continuing. This makes the potential range of a video large.

In addition, videos are generally highly valued by the media consumer and the message is better than with other forms of content. To achieve this, a video doesn’t necessarily have to be flashy and complicated, as the relatively simple presentation video of the scientific consortium WOMB project shows below. This video was well received during the midterm presentation of the study and the second part of the grant was awarded by the subsidite.

Downsides of the animated video

Are there no (possible) disadvantages to using animation video for scientists? It wouldn’t be fair to say that.

For example, videos in general, animated videos in particular, are laborious and therefore relatively expensive to have them made. Don’t be alarmed by prices between 500 to 1500 euros per minute. The price depends on the wishes of form, length, voice-over, animation style etc. Not all scientific consortia and organizations have a communication budget that lends itself to having an animated video made.

Furthermore, an animation video is almost never used autonomously, but acts as an additional part of a communication mix. Think of an animated video on a website or social media channel, or as an interlude during a real-life or online presentation. So with just an animation, you’re not there yet.

Furthermore, videos are not the preferred medium for all types of communication goals. As explained above, animation videos especially have great added value when abstract topics, investigations or processes need to be explained simply and quickly. Sometimes this is simply not necessary and (cheaper) texts and photos or the use of infographics are sufficient.

Want to know more about using an animated video for your scientific consortium, project or company? Book a free consultation with our science communication specialist here.

Let’s get to know: welcome to Consortius science communication.

Blogging for Scientists: The Ultimate Guide

Through your own blog you can reach and inform the outside world as a scientist, consortium or spin-off. Think of news and insights about research, field or organization. Such a blog can be an incredibly useful platform to achieve your communication goals. Unfortunately, many good intentions are stranded prematurely. This guide helps you to make the chance of a successful, effective (science) blog as great as possible.

The 7 best videos on science communication

More and more lenders are making the 'communication' component compulsory within a scientific application. However, not all scientists are intrinsically convinced that it is useful – let alone necessary – to make their research more visible and understandable to the outside world. That's why we put together a top-7 of the best videos that address the usefulness and necessity of science communication.

Consortius is a brand of WYZYN COMMUNICATIE, registered at the Chamber of Commerce Amersfoort (NL) under number 52498174. Click here for the General Terms and Conditions. Our privacy statement can be found here.